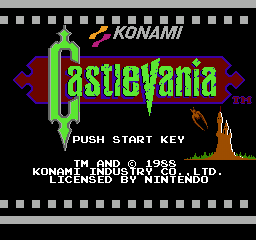 In the mid-80’s Konami came up with an idea of a platformer that would pay homage to classic b-horror from the 50’s and 60’s. From the beginning to the end, Castlevania was made to look and feel like a massive all-star horror show with infamous monsters under Count Dracula’s service, plus a new, original hero given the task of putting an end to the show. Simon Belmont became an icon in the world of action-oriented platformers, and the game was followed by about a million sequels, spin-offs and remakes. The series’ original b-movie concept was forgotten as soon as the “deeper” sequels started to pour in, and the thin storyline does indeed feel a little weird, but as a game, the first Castlevania is still one of the best installments in the series.

When a problem comes along, you must whip it

It’s the year 1691. Transylvania has been a peaceful and prosperous region for a century, thanks to the endeavors of one Christopher Belmont, who slayed the abominable king of vampires, Count Dracula. His sudden and unexpected resurrection casts a dark shadow over the region, and it is up to Christopher’s heir Simon to follow his great grandfather’s footsteps and storm the evil lord’s castle. However, to get to Dracula, he needs to get past his minions, including Frankenstein’s monster and Dracula’s right hand man, the Grim Reaper himself.

The game doesn’t look very nice, that’s for damn sure. With all the confusing pixel work, it’s hard to make out where you should or even can go from time to time. Considering the times, though, some of the monsters, especially the bosses, look really, really cool. The graphics don’t stand for jack when it comes to the music in the game. The tight, pseudo-gothic soundtrack creates a huge part of the atmosphere. Some of the most classic tracks in the series originate here, including “Vampire Killer”, "Wicked Child" and “Heart of Fire”. No “Bloody Tears”, not until the otherwise lackluster Castlevania II, but MIDI heaven nonetheless.

You play as Simon Belmont, a long-haired badass armed with his family’s whip passed on for generations, dubbed the “Vampire Killer”, and an array of secondary weapons: holy water, shuriken, dagger, hatchet and a vintage pocket watch, which naturally doesn’t deal any direct damage on enemies, but enables you to freeze time for a few seconds, which makes it a very essential item. There are candelabra scattered all over and everywhere, and by breaking them with the Killer you earn power-ups such as hearts (used to activate your secondary weapons), money (which adds to your score) and upgrades to your whip, which remain activated as long as you stay alive.

The basic idea is to hack and hop through six different stages, which have three sublevels each. That makes up for a total of 18 levels for you to explore and sweat through. Every wooden door unlocks the next sublevel and at the same time, serves as a checkpoint. The continues are unlimited, but if you lose all your lives, you must start from the very beginning of the stage you’re in.

There are some very minor instances in which you are unfortunately able to take a wrong turn and will be forced to take the long route back. This is quite annoying since there is a strict time limit for you to worry about. Personally, I never had any problems with it, but those even more into exploring than I might want to know that it is never worth it in this game – there’s nothing really essential to be found in places you don’t immediately see. The top dollars when it comes to the most annoying things about the game include enemies that pop out randomly, such as hovering Medusa heads, which can easily push you off tiny ledges and stairs. Yes, that’s _plain_ stairs. You see, you can’t dodge anything while you’re climbing up one of the million staircases in the game, your movement is ultraslow, and if you jump onto a staircase, you’ll fall straight through it. There are many intense sequences in which you have to move and fight at the same time, and at those times, lingering near a staircase isn’t fun, or very healthy – especially if the bottom of the staircase is on another screen – that case spells certain death.

Most of the game consists of straightforward, pretty standard whip action, which gradually becomes a more difficult method of playing as you progress and very soon you will find yourself in situations you simply need to use your secondary weapons to your advantage. The game allows you to stock up on a pretty fair amount of hearts, so you should have no real problems using the weapons. The boss fights in the game are epic and most of them require smart positioning and precise offensive strategy; you have to time your crouches and jumps correctly, defend yourself with the whip if necessary, and attack only after you’re completely certain you won’t hurt yourself in the process – it is essential to stay healthy in the game. Your health bar isn’t nearly as forgiving as it might first look like, so don’t go whipping around like a moron.

The game is not too difficult once you learn the basic rules. It is widely considered the hardest Castlevania game, but I think that’s an extremely bold statement due to Castlevania II’s quirks which make it nearly impossible to beat without a guide, and Castlevania III’s true difficulty. There are not too many easy games in the whole series, and I just don’t think the first one is as hard as they come. No jumping on staircases, and stay as far away from ledges as possible ‘cause you never know what sort of a flying bastard is heading to you. Some enemies are real pains in the ass (such as those disputed little assholes that look like humping monkeys) and there are some really, really difficult boss battles which require a lot of strategic planning, and most of all patience. The game isn’t very long, actually it takes no longer than about an hour to complete on moderate speed, but it can still give you trouble for weeks. When you beat the game, you have the opportunity to test the limits of your skills with a hidden “hard mode”. Now THAT is some shite!

Castlevania is still one great game, which eventually must’ve played a part in the birth of the survival horror genre, as well as violent slashers such as Devil May Cry and God of War – the influence is clear. I might not be an actual die-hard fan of the ‘Vania franchise, but I sure as hell can’t deny the game’s level of entertainment, it’s influence and legacy.

Nintendo Power ranks Castlevania #23 on their list of the Top 200 Nintendo Games of All Time.

There are four commercial remakes of the game: Vampire Killer (MSX, 1986), the arcade game Haunted Castle (released in 1988), Super Castlevania IV (SNES, 1991) and Castlevania Chronicles, which was originally released exclusively for the Sharp X68000 in 1993, and ported to Sony PlayStation in 2001.

The candid credits in the end of the game (which include “Christopher Bee”, “Love Chaney Jr.”, etc.) remained in every port of the original game, until they were removed from the Game Boy Advance version in 2004.
Signed by Kuzpo klo 3.24