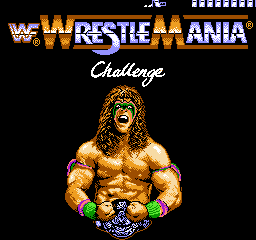 The game looks quite good, actually. It totally differs from its predecessor in both sprite size and angle, as the playfield's now isometric. The background music constantly switches between the theme songs of the wrestlers involved in the match. Or some tunes resembling them, they're not really recognizable apart from Savage's "Pomp and Circumstance". The theme song of the game is very vintage, yet quite flat David Wise.

Let's go over the few things I like about WWF WrestleMania Challenge rather quickly. It's a quite advanced wrestling game considering that it was the second licensed one ever released. There are stamina meters for each wrestler, indicating when you should go for a pinfall, and no time limit to any match. In theory, the moveset is larger. You have two different grapple moves, which are dependent on whether you attack your opponent from the front or back. You can do dropkicks off a basic stance, and attack grounded enemies. Also, apart from the tournament from the previous game returning, tag team matches are possible, as well as classic Survivor Series 3-on-3 elimination matches. This is all really dandy. Top the theoretical enhancements with one of the all-time greats, The Ultimate Warrior, being the game's title screen mascot instead of the usual Hulkster - however, Hulk has larger presence than anyone else on the box art. That's how it used to be - no casual wrestling fan would have bought a WWF game if Hulk's picture was not on it.

The main eventers from the unforgettable WrestleMania VI are indeed in the game, and joined by another mixed bag of six wrestlers: "Macho King" Randy Savage, Ravishing Rick Rude, Big Boss Man, Hacksaw Jim Duggan, Brutus "The Barber" Beefcake and Andre the Giant. Personally, I would've replaced Beefcake with Jimmy Snuka, but I guess he was deemed too old (in many senses) to appear in the game. Or Rowdy Roddy Piper. Or Dusty Rhodes, seeing that the guy actually defeated Savage in WrestleMania VI, fair and square. I also think that a game that focuses on tag team action is kind of incomplete without Demolition or the Hart Foundation. But I guess it's just me. In addition, there's a generic wrestler that is supposed to be you. You can't customize him in any way, not even his name this time around.

After reading about the game and its theoretical advantages over its sequel, you might be just soiling yourself and expecting the greatest retro wrestling game there ever was. Well, the reality of it is, that everything that sucked in the first game, sucks even more in WWF WrestleMania Challenge. The gameplay is described as "fluid" by many sources. Yeah. It's like skating. It's so oversensitive, and totally floaty. You'll spend so much time chasing your opponent down, your "big fight" looks more like a Disney ice show than a wrestling match. Seriously, they run away ALL THE TIME. By far the only times they bother to attack you are when you're straight on their tail, and fail one badly timed punch to the back of their heads. The time it takes for you to load another punch or kick, or grapple, is the time the opponent takes advantage and lands one or two cheap ones. Ticks in your stamina meter seem to decrease by large amounts whenever an opponent lands one single punch, whereas you're lucky if you can cap half a tick off their meter with your counterpunch. You have no choice but to lock your opponent up from the very beginning of the match, and show no mercy to your controller. Not very exciting. The advanced techniques? Cool on paper, but they don't work.

The dropkicks miss 95% of the time. You know why? Because there's no targeting system of any kind, and the playfield's isometric, so the opponent can quickly move to any direction out of harm's way. The dive attacks? Well, I still haven't figured out how to do a dive INTO the ring. My wrestler just keeps diving to the outside, regardless if the opponent's there or not - usually gets counted out, too, since it's so damn hard to return to the ring from the outside! It's easy to leave the ring, of course. A bit too easy. Actually easier than it is to remain in the ring.

The tag matches are nightmares. If the CPU has Hulk Hogan or Andre the Giant on the opposite team, you can pretty much count on getting your ass kicked if you even try to do anything else than superkill your controller. Even Warrior's a weak playable character even though he was the actual golden boy of the company at the time, having won the WWF Championship from Hogan at WrestleMania. When tagging your partner, don't be surprised if the A.I. figures you're trying to leave the ring. I tried to bring some authentic coolness into the game by tagging Hogan in at a crucial moment (using the generic character) to give Andre one final leg drop as I had managed to drain all of his stamina meter with some strange magical skills, but ended up out of the ring and counted out instead.

The game is impossible to enjoy, but theoretically - I've used that word a lot - it could've been a quite decent game. It has many good ideas related to a functional wrestling game's physics, it's just too bad the execution sucks ass. Like its predecessor, WWF WrestleMania Challenge is somewhat cool in a remote and different kind of way that is usually perceived "cool", but as a whole experience, it's even worse than the first game.