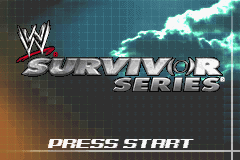 I feel quite disheartened right now. Something didn't quite add up when I was getting ready to review WWE SmackDown vs. Raw 2007 - it felt wrong, like I had forgotten something. I checked THE LIST - this is the first time I've regretted writing the whole thing - and I did indeed find one more game that was unrelated to the SmackDown vs. Raw series, released in 2004... for the Game Boy Advance. After playing the last game in Game Boy Advance's exclusive WWE sub-franchise - WWE Road to WrestleMania X8 - I made somewhat of an oath never to touch a pre-PSP handheld wrestling game again, but what can I do? I already knew what I was in for, I just didn't quite expect to see a game that has not changed AT ALL in two years as far as graphics and crappy controls go. WWE Survivor Series is a pathetic waste of time, the stained crown jewel of the crappiest year of modern wrestling games there was.

There's one good thing about it - it's the last one

Graphically, the game is absolutely identical to Road to WrestleMania X8. Since they added the "Story Mode", I guess the technical limitations of the Advance prevented them from improving the graphics. It still looks good, but makes the feeling of "been there, done that, hated it" that much more prominent. The game sounds the best of all the three Advance titles; the original music's good and the theme songs are at least recognizable. Even in MIDI, Motörhead rules... they're Motörhead, of course they do.

For the first and only time in a Game Boy Advance game, the brand extension from 2002 is dearly noted. There are eight wrestlers on the Raw brand, and an equal amount on the SmackDown! brand. The funny thing is that about 14 out of the 16 wrestlers are of undisputed main event material, and we have Chavo Guerrero on SmackDown! and Christian on Raw to cap it all off. I love Captain Charisma to bits, but back in 2004, when he was still a heel, he got an anti-push for the ages; he wasn't really the most ideal playable character in a game. And Chavo? Regardless if he was face or heel, Chavo has never really struck me as a very special singles competitor.

WWE Survivor Series has a Story Mode like the first game in the Advance series, but this time they luckily settled with still images of wrestlers and executives talking to you in simple text format instead of appearing in those poor man's cutscenes they had in Road to WrestleMania. I chose Chris Jericho as my wrestler and started hacking through the story right away. First, Vince turned up and welcomed me to the WWE and all that. Well, thanks, though Jericho has been with the company for quite some time. Former world champion, mind you. Then, Eric Bischoff laid down some house rules, which unfortunately are very strict. You see, to make it in this game you need to follow a certain code which is nearly impossible to follow due to the horrible controls.

To make a long story short, the "code" is all about winning matches, being flashy and using as many different moves in all matches as you can, using a variety of weapons in Hardcore matches, and using your finishing move to win. For example, just doing one DDT in a match counts for an increase in popularity. Sounds all dandy, but like I said, we would need a somewhat playable game to keep up with the code. Even trying to colour the match up a little usually results in your opponent grappling you from the back and suplexing you from here to eternity. Never turn your back on the opponent! And never get caught up in a pin, to point out a recurring problem. So, I've only won three matches and therefore, made it through the first "storyline" in the game, and my popularity is still worth an "E". Well, of course it is - the bad controls prompt me to do everything I can to win the match - punch-kick-punch-kick-punch-kick-a lucky bodyslam - instead of really trying to live up to Bischoff's demands of high-quality sports entertainment.

If the game was any more responsive, it would be challenging and fun to live up to the code. This unique theoretical feature of the game has all the potential to separate it from the games that preceded it, but it doesn't work by itself. They had a good idea here, but seemingly Natsume forgot that a good idea is only the first part of execution. It's useless to utilize a good concept if nothing is done to improve the gameplay. I'm willing to bet they thought Road to WrestleMania X8 was criticized because it didn't have any sort of Story, Season or Career Mode. Wrong, it was criticized 'cause it was a shitty game with horrible controls. They followed the wrong path here, ending up with another shitty game with horrible controls - another ridiculous, useless item in the history of professional wrestling games. Luckily they finally realized they were going nowhere with these Advance exclusives.

As of March 26th, 2011, the only game I've ever reviewed that can't be found in the MobyGames database. A very random piece of trivia, I know, but interesting.
Signed by Kuzpo klo 4.43