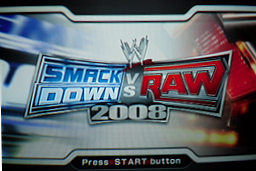 At the time WWE SmackDown vs. Raw 2008 was released, I still considered myself a die-hard professional wrestling fan even if the previous game disappointed me, and all of WWE programming had been moved to expensive cable. I felt that I just couldn't afford to miss the game, and a lot was promised of it, as always. Well, then came the reviews, a day before I had received my pre-ordered copy of the game. The game was totally crapped on by just about everyone. I thought to myself: it's the same as every year. At that point, I didn't care. At that point, it was enough for me if the game was an updated version of the previous one, as long as it was a quality game in itself. Well, I've never grown tired of a SmackDown vs. Raw game as fast as I grew tired of the 2008 edition. As cool as it looks on the outside with the addition of ECW and some long-anticipated additions to the roster, on the inside we have some of the weirdest glitches ever, the crappiest Season Mode you could ever imagine (and the last incarnation of it, for now at least), and a GM Mode that is "improved" the wrong way. Sure, it's a playable game, it has good controls and all, but all that's good about it was invented years ago.

One would expect the graphics to be grand; the game was the first one in the whole franchise to be carried over to the PS3 powerhouse, and the PS2 version was promised to have the best damn graphics the last generation could possibly generate. Yeah, well, on the surface it does look quite good... until someone opens his or her mouth in a cutscene close-up. Everyone has a mouth like Steven Tyler, their eyes look weird, and the Divas look butt-ugly, especially Ashley and Candice, and butt-ugly isn't exactly what I'd describe them as in real life! There are so much graphical glitches I really have to stop from time to time and reflect on how seriously Yuke's took the development of the PS2 version. Sadly, glitched graphics are only the beginning when it comes to some serious buggery.

The soundtrack features the least impressive tracks in the franchise's history. Only the Xbox 360 version has the option of custom entrance music, and it's really hard to find a suitable theme song for my created wrestler in this PS2 version. The Season Mode sucks so bad, that actually the only reason I even created John Crane in this game was force of habit. The commentary's a bit improved in Season Mode, but both teams still make amusing, sometimes downright annoying mistakes, in all other gameplay modes. I have to ask this one more time: was the game rushed, or is it just the PS2 version?

The roster's moderately strong; we've seen larger ones and it has to be noted that 42 regulars is less than a sufficient amount of wrestlers when there are three rivaling shows in the GM Mode; I haven't even seen the GM Mode through in this game, but the small amount of decent wrestlers on my roster is not the reason. I'll tell you about the reason(s) later. There are only nine Legends, too. Accompanying the usual group of Bret Hart, The Rock, Stone Cold Steve Austin, Mick Foley and Roddy Piper, we have Ravishing Rick Rude, Sabu and Terry Funk. This was the last game to feature WWE Legends, probably due to the fact they couldn't come up with truly exciting new ones.

The game boasts with having over a hundred different match types. Well, that's true depending on how you count, but the only really, undisputably new match type never seen before in any game is the ECW Extreme Rules match, one of my new favourites. Submission manouvers have this new analog-controlled pressure system, and all forms of Ultimate Control, interacting with hotspots, and ladder matches are notably improved. All in all, the controls are great, while the game itself isn't that exciting. The most important new "gimmick" of this game is the fighting style system. Each and every superstar in the game, counting your own creation, has a very distinct style. For example, Jeff Hardy (welcome back!) is a high flyer, and very proficient when it comes to dives and springboard moves. CM Punk is a submission artist, which makes him better than the average wrestler when it comes to submission locks. The system's good, but it somewhat limits the earlier experience, since you simply cannot execute certain actions if you don't have a corresponding style in your arsenal.

There are three main modes in this game. Let's start with the smaller ones. In Tournament Mode, you can take part in a King of the Ring tournament or Beat the Clock Sprint, OR create your own tournament for whatever you wish. It's that random fun which every game has had thus far - there are not really any rewards for it to the casual player. WWE Hall of Fame replaces the old Challenge Mode, but the idea is pretty much the same. You have to win certain types of matches with certain criteria, sometimes using a certain superstar. For example, you need to repeat Shawn Michaels' success in the 1995 Royal Rumble by entering the Rumble at #1 and winning on Legend difficulty. Or relive his glorious victory over Bret Hart in an Iron Man match at WrestleMania XII. Trying to conquer all challenges to be inducted into the Hall of Fame is by far the most entertaining part of the whole game. See, we don't have a traditional Season Mode, or a GM Mode... we have a boring abomination called WWE 24/7.

WWE 24/7 allows you to hack through a very faceless variation of the Season Mode as the most boring superstar ever. The storylines suck, and your wrestler has zero personality - regardless of who you choose. The cutscenes are so whacked, and feature those butt-ugly Divas on such regular basis, that I usually just skip them and play the matches, never really understanding what's going on in the plot. Oh well, I'll just read the recap in WWE Magazine after the pay-per-view and crack myself another one while doing it. The GM Mode is the same as before, only this time there are three shows, which means you have absolutely no chance in hell to get everyone you want, and which also means you have to watch as ECW steals high-profile wrestlers who would've left the WWE in a heartbeat if they were forced on its roster: The Undertaker, Triple H, Shawn Michaels, name whoever. I got lucky and got the best roster I could've possibly imagined of getting, so I headed into the GM Mode for the first time feeling pretty damn buffed. Well, it's full of glitches, I'll tell you that. I'm really not in the mood of recapping all the glitches I've bumped into while playing the mode, but I'll tell you two of them.

First, I created a stable between Carlito and Johnny Nitro, and made them the tag team champions on my show. Then, I created a rivalry between them and the Hardys, for the tag team gold of course. Well, then I put Edge and The Undertaker in a feud for the heavyweight championship. Well, then came Backlash, the first pay-per-view on the calendar. Carlito & Nitro vs. The Hardys in a TLC match for the tag team gold, and Edge vs. The Undertaker in Hell in a Cell for the championship. The game said "nuh-uh". What the fuck just happened? Why? Well, first of all, the game tells me I'm trying to pit Carlito & Jeff Hardy against Johnny Nitro & Matt Hardy, which does not fit the picture. Hell no, it doesn't fit the picture and that's not what I'm trying to do! Obviously, I have the teams lined up just right, so what's the problem? Well, then I took the tag team gold out of the picture - then it was OK, the teams were lined up right and the rivalry could continue. Marvellous. And mysterious. OK, we are not going to see a tag team championship match tonight, so on to the main event - the Hell in a Cell. I'm trying to set the match to be for the championship, it doesn't work. Motherf... The Undertaker IS the champion! Not according to the file. The file shows that the heavyweight championship is in fact, vacant. Which is kind of funny, since I defended the title just last week on Raw.

I'm not saying these glitches can be stumbled on by everyone, but they're possible and I don't know about you and your unexplained love for glitches, but I don't find them very entertaining. In fact, I just simulated my whole season as a GM, and for some reason, I got lucky and got the "GM of the Year" award to nail the Hall of Fame trophy for it. Yay. Feel my excitement? On top of all, they "improved" the GM Mode to a whole wrong direction. Remember how you were forced to put guys in matches even though they were practically dying, or you didn't personally like them and couldn't come up with any use for them? Well, the game's called 24/7, so now you need to work up your roster seven days a week, by placing them in promos, movie shoots, anything to increase their popularity. Sounds cool, right? Well, it's boring. And slow. And repetitive. Just struggling through two months of programming, especially with all the rampant and totally random glitches, takes as much time as completing the whole season did before.

Like I said, I've never been done with a SmackDown! game as fast I was with 2008. If I remember correctly, the only mode in the game I returned to after owning it for three months and letting it rest on the shelf for the last two, was the Hall of Fame - and a couple of the challenges on that list are just otherworldly, nearly impossible to nail. Yep, there's yet another Money in the Bank ladder match challenge to be conquered, on Legend difficulty. That near impossible. But still, at least the Hall of Fame manages to uphold some interest unlike the 24/7 Mode.

WWE SmackDown vs. Raw 2008 gives new names to age-old stuff, and all of that stuff's downgraded to some extent. It's full of those damn annoying bugs to boot. If you own Here Comes the Pain, SmackDown vs. Raw 2006, and/or 2010, you really, really, really should not waste your time with this edition. It's second only to the first SmackDown vs. Raw title when it comes to the weakest game in the SvR franchise. And, since the next game will not be reviewed, I'll just say right now that it didn't turn out much better.