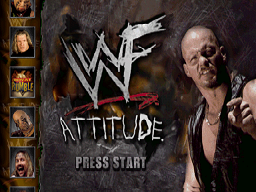 WWF Attitude is not just a fancy name for a video game, it was an actual era within the world of professional wrestling. In the heat of the ratings war (dubbed the Monday Night War) between WCW Nitro and WWF Raw, the WWF adapted a style of programming aimed at a more mature audience as opposed to their earlier years, when they had family-friendly heroes for cover boys, such a Hulk Hogan and the Ultimate Warrior. This era spawned such controversial factions as Degeneration-X, originally led by Triple H and Shawn Michaels, and the Ministry of Darkness, comprised of the satanic minions of the "Dark Lord", The Undertaker. I've said it before that I consider Attitude the finest era of professional wrestling there ever was. I wish the same praise could be given to the namesake game of these glory days - the last WWF game by Acclaim, who had co-operated with the company ever since the beginning. It's notably better than WWF War Zone, but it has its quirks. Lots of 'em.

It's clear right from the start that the game is a major overhaul from its predecessor, when it comes to overall features and graphics. Even on the Nintendo 64, which really doesn't allow much space for audiovisual improvement, the game looks quite decent. It's not nearly as blocky and "bubbly" as the previous one, and the entrances, which now rear for the first time, are perhaps less than generic when it comes to effects, but the moves are moderately unique for each superstar. When it comes to the music, the sound bank's a hell of a lot better. The theme songs are in real audio format this time. The commentary's still repetitive and I find King calling his own matches kind of funny, but at least there's some passion in it. Every guy in the game did his own voiceover work, and man, does it sound horrible or what? I can't believe that even The Rock sounds like he was taking a shit and someone sticked a microphone in his face. Each wrestler has some sort of short pre-match taunt; every single one sounds laughable... at best.

There is a previously unparalleled amount of 44 characters in the game. 14 of them are secret characters, who are kind of a funny, partly slapstick bunch. At least I can't take wrestling using Paul Bearer (The Undertaker's former manager known for his extremely high-pitched voice) very seriously. Or "Head", a fictional, bodiless jobber voiced by Al Snow. The rest of the secret cast includes Cactus Jack and Dude Love, like the previous game, as well as Shawn Michaels who was retired from active wrestling duty at that time, Sgt. Slaughter, Jerry "The King" Lawler, and the first chosen few female wrestlers in a WWF game (I'm not counting Luna Vachon in WWF Raw) - Chyna, Sable and Jacqueline. The standard line-up consists of many factions and tag teams, which were as much of a main focus in regular WWF programming as the WWF Championship back during the Attitude. The Acolytes, D-X, The Headbangers, The Brood, The Ministry of Darkness, The Corporation - they're all here in some shape or form. I dig the line-up of the game quite a bit, I can't really name anyone who was left out unfairly. Well, except for Viscera who was a very visible part of the Ministry (literally), but I've never personally liked the guy, so I'll let it pass.

The character editor in comparison to the first incarnation of it, has evolved by quite a sum. The face and physical structure of your creation are now customizable to the extent the overall capacity of the platform allows, and there are more options in clothing and accessories, not much more sensible than before though. Possible choices for custom movesets, theme songs and entrances still come in very few numbers, and the custom voices sound even more ridiculous than those of the actual superstars in the game. The actual gimmick of the game is to customize just about everything to your liking. The details of the arena such as colours of the stage lights and the ring, your friendships with people on the roster (I've never had a guy come to my aid, though), line-ups of tag teams, even pay-per-view schedules. While there are no actual pay-per-views in the game, you can create one. Once again, though, saving your character, your pay-per-view and progress in general is possible only if you have a Controller Pak.

There are plenty of match types to go around. We haven't even got to our first match yet, so don't get your hopes up of a great game, though. First, there's the Exhibition Match. You can choose between a standard single or tag match, a tornado tag, two kinds of handicap matches, a lumberjack match, a gauntlet, a tag gauntlet, Survivor Series, Royal Rumble, two sorts of fatal fourways, a stable match, and two different triple threats. Whew! Talk about an overhaul! Well, it doesn't end there. Once you have chosen a standard match, you can colour it up a little by adding a win modifier, in other words a last minute stipulation. You can suddenly make your match-up an Iron Man match, I Quit match, a Finisher match (never heard of that one before) or a 2-out-of-3 falls. Then, there's a King of the Ring tournament for you to participate in, as well as a Career Mode in which your ultimate goal is to win every active championship belt, starting from the European Championship, all the way to the coveted WWF title. Sounds so good I'm almost embarrassed to say the gameplay sucks. Not as bad as before, but it's one department Acclaim didn't get very far on. It's great they made all these improvements, it's just too bad they missed the most important quality of any game.

The wrestlers move faster and a little less emphasis is placed on the use of the camera buttons. It's not any more comfortable to use the analog stick, though, I'm still with the digital pad on this one. It's easy to execute moves, but a casual player might find himself sticking to the same moves since proper button combinations to do even some of the most standard actions are extremely difficult to remember. Doing the same moves over and over again is not the way to go, since the momentum system is still in, stalking the casual player and whipping his ass each chance it gets. It's the controller itself - once again, the Nintendo 64 controller was not created for wrestling games. I'm now halfway done with the WWF quadrology for the N64, and really hoping that THQ found a way to turn the tides when it comes to the controls - I've never played the two successors before. I did play this game for the first time a few years ago, and my opinion apparently hasn't changed one bit.

Of course some quirks related to some match types remain. Be it any sort of match to which the count-out rule applies, the opponents still have the tendency to lock you in a submission manouver outside the ring and leave you lying there until the bell's rung. Cheap bastards. In tag team matches, you need to "target" your partner in order to tag him, and fend off the legal opponent at the same time. A couple of times I found myself in a handicap match, since my stupid created wrestler would not target The Undertaker, no matter how hard I tried to get him to do so. Somehow, Mankind managed to tag in The Rock in midst of beating my character to a pulp, and suddenly I was manhandled to hell by the Rock 'n' Sock Connection in its entirety. Taker had been calling for a tag for the last five minutes and the commentary team had berated me for an even longer period of time when I finally just decided to fuck it and leave my incompetent character at Mankind's mercy.

Due to better graphics, a definitive roster of superstars and loads of new features, WWF Attitude slaps its predecessor semi-silly, but its gameplay values go to show why the WWF game franchise needed a reboot. The control scheme might be slightly more sensible than before, but it's not any easier to work with.

All versions of the game, with the exception of the original Game Boy Color version released in March 1999, are dedicated to the memory of Owen Hart, who died in a house show accident on May 23rd, 1999. The developers chose not to delete him from the roster of subsequent versions.

Despite not being included in the game's roster, Matt and Jeff Hardy performed motion capture for it.
Signed by Kuzpo klo 18.44